Storytelling Workshops for Children in Singapore

Behind the Scenes of our 'The Grinch Who Created Christmas' Workshop 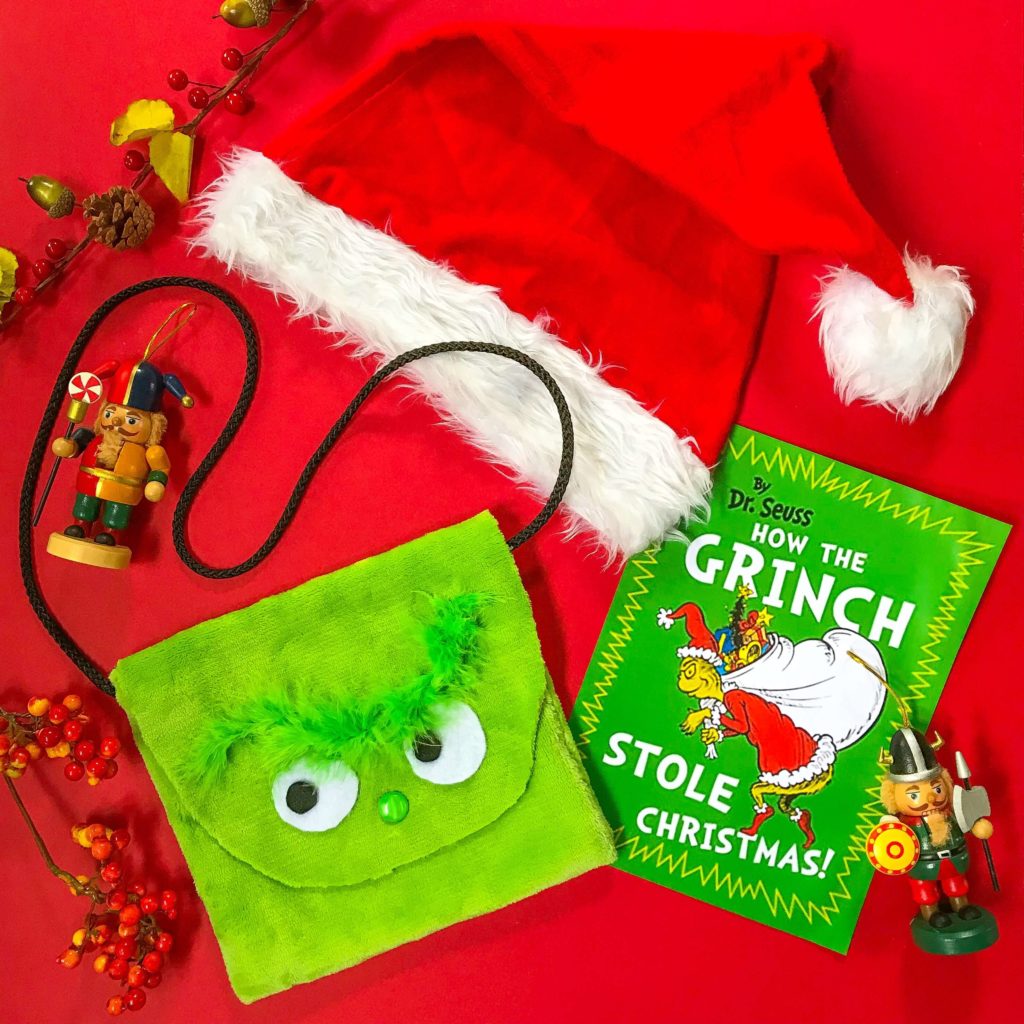 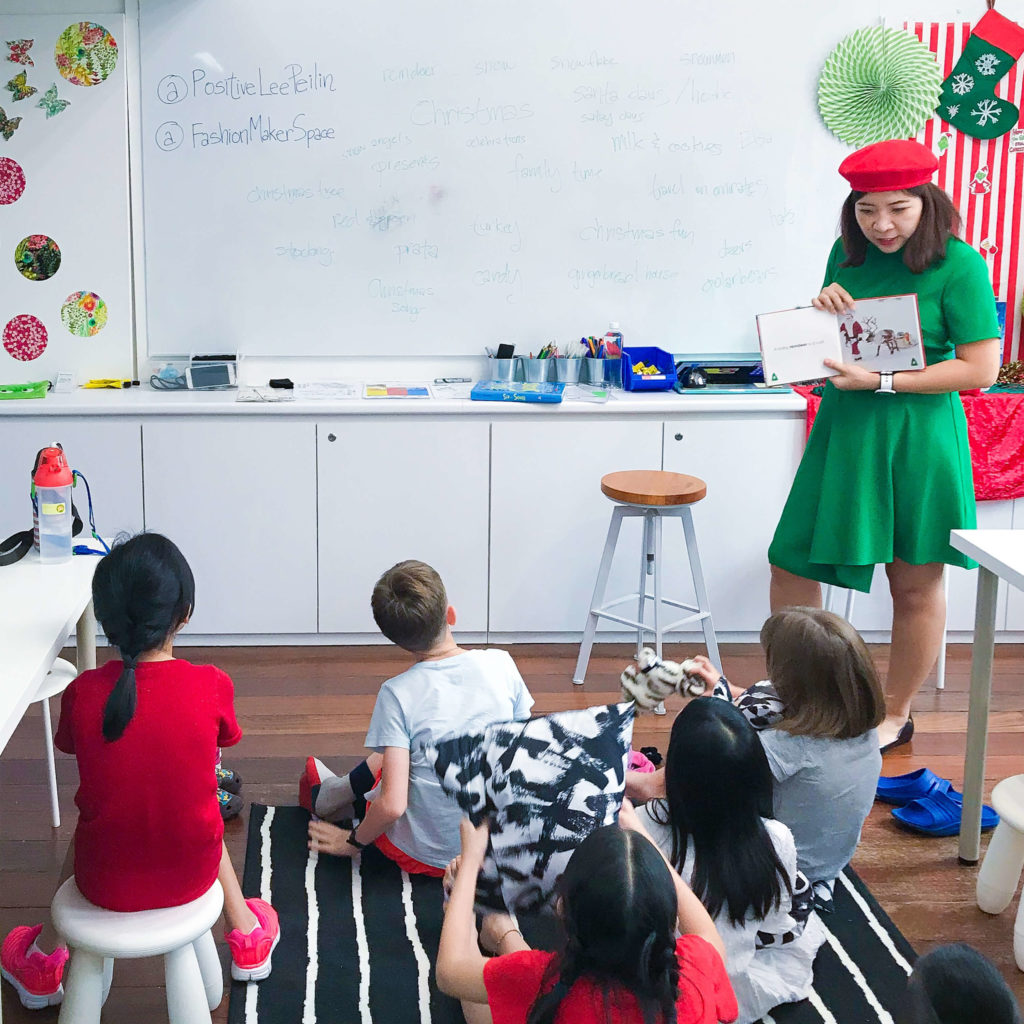 The school holidays are here and we are here to help with storytelling workshops for children in Singapore!

Are you silently screaming inside & racking your brains over how to entertain your little one whilst hopeeeefully squeezing in some learning too? Are you up googling late at night to see what you can DIY with your kids?

Five families and ten children spent an afternoon with us with storytelling, sewing with machines and experimenting with eye expressions! Here’s a behind-the-scenes look at our storytelling workshops for children in Singapore! 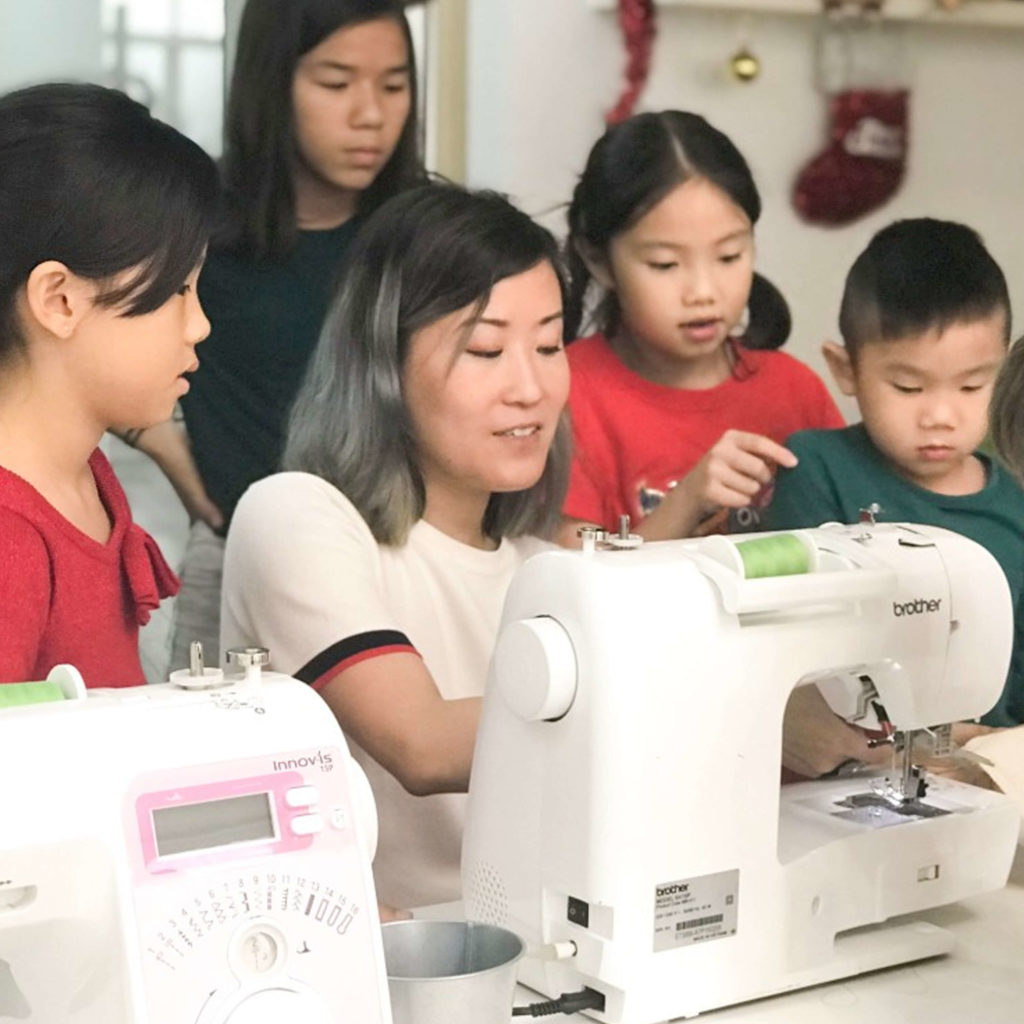 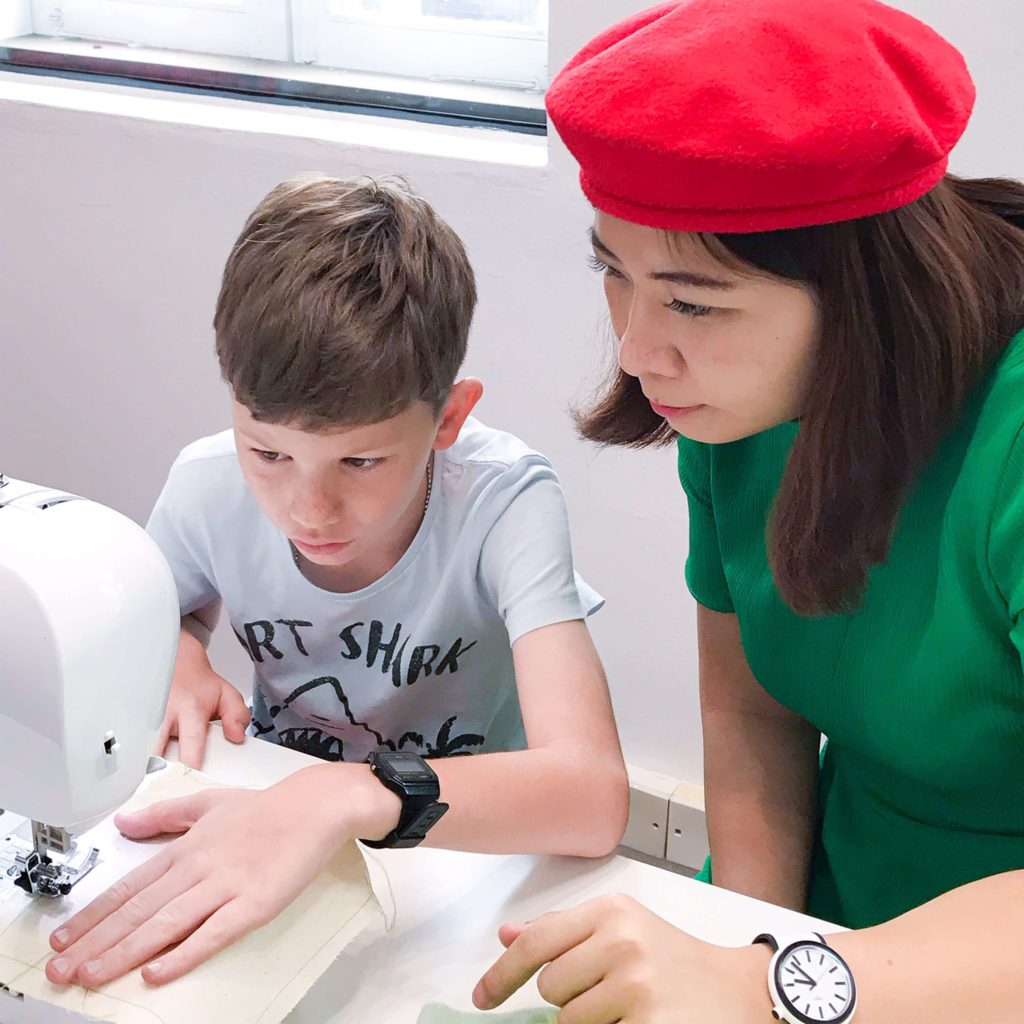 What We Did Together:

Unsurprisingly, ‘presents’ was the first thing the children yelled out! I wrote “Family time”, “santa claus” and “holidays” on the board as the children chimed in, acknowledging the children’s contributions and building their confidence. Theo, 9, said that ‘Satay Claus’ should be a thing this Christmas *chuckle*

We then used non-fiction books to show photos of some of the elements they shared, so that all the children could link the written words with the images.

I shared the gripping tale of The Grinch Who Stole Christmas with voice effects, rhythmic prose and emotions. The energy and rhyme of Dr Seuss’s famous tale had the children enthralled, as they listened to The Grinch’s anger at the townspeople, how he meanly stole all their presents and food, and finally how he realized that Christmas did not come in a box.

3. Our Eyes and What They Tell Us

The Grinch illustrations show Grinch going through different emotions, from anger, frustration, jealousy to surprise, pleasure and content. Using drawings of different types of eyes, I asked the children what each pair of eyes were saying. Children are amazingly astute and could immediately tell what the emotions were. We role-played the various eyes emotions, looking at each other and growling / laughing / yawning as we acted together.

When it came to ‘Bored’ eyes, Kate, 6, rolled her eyes and said “that’s the look I give my brother all the time”. The adults cracked up in laughter as she crossed her arms grumbling about her younger brother. Kids say the darnest things!

The children then choose which eye expressions they wanted for their Grinch bag and made them out of felt and glue.

The children gathered around sewing expert, Shareen, as she showed them the parts of the machine and how to use it. Instructions included how to use the pedal, footer and needle, and which buttons to press at each point. The children then practiced sewing straight lines on calico, which is stiff cotton cloth that is easy to handle.

Using pre-cut furry green cloth, the children started sewing their own bags! Under the guidance of the four sewing instructors, the children drew lines with chalk, folded the cloth and whirled the fabric through the sewing machines.

“I was surprised that Amber could sew it without my help! This is great reinforcement that she can do things that are hard!”, said the Celine, the 7-years-old’s mother.

“I didn’t realise that all the sewing happens on the inside of the bag and that a bag is made of so many parts!” said 15-year old Tara, who came with her younger sister.

The children choose buttons for their Grinch nose, and attached the bag straps and eyes on their bag. Amber even gave her Grinch bag a modern makeover with purple and blue eyeliner (fabric markers). After that, the children proudly showed their parents their bags and posed for photographs at the decorated photo booth area. 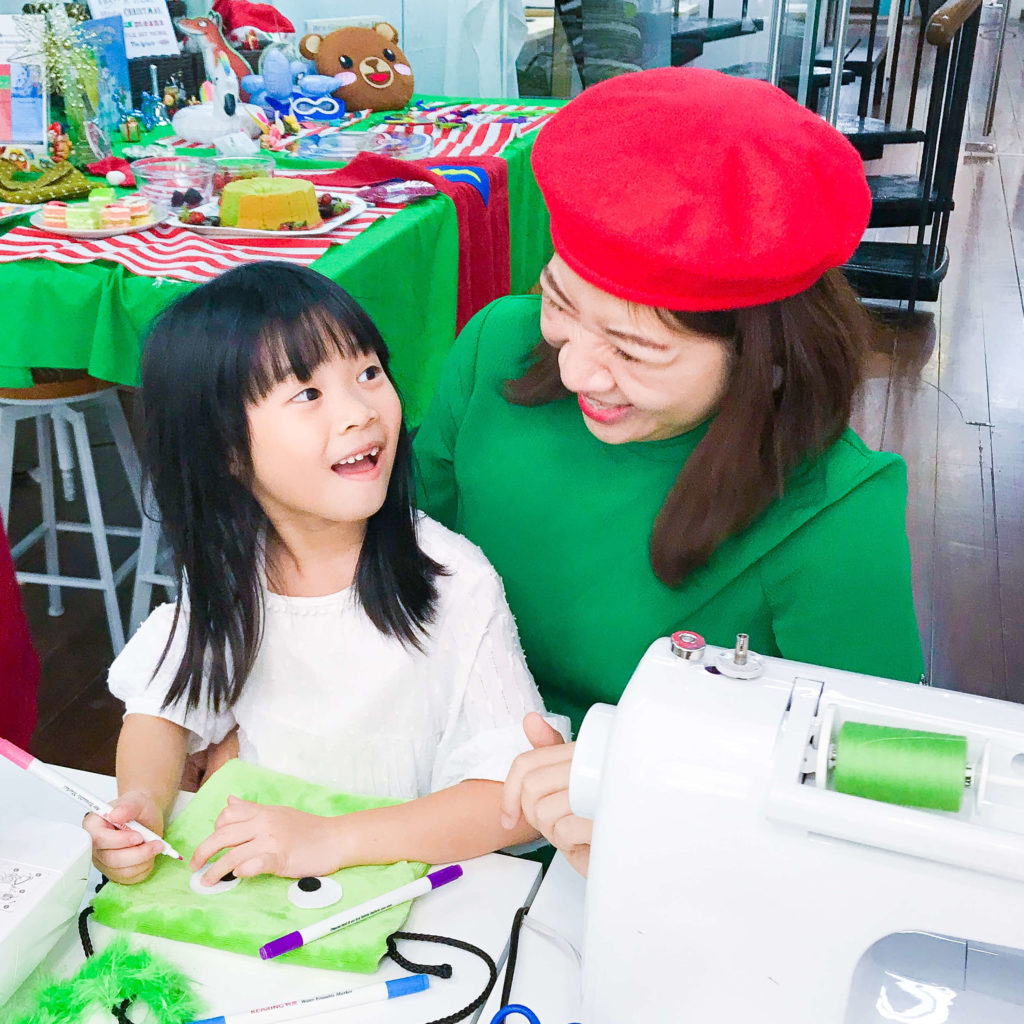 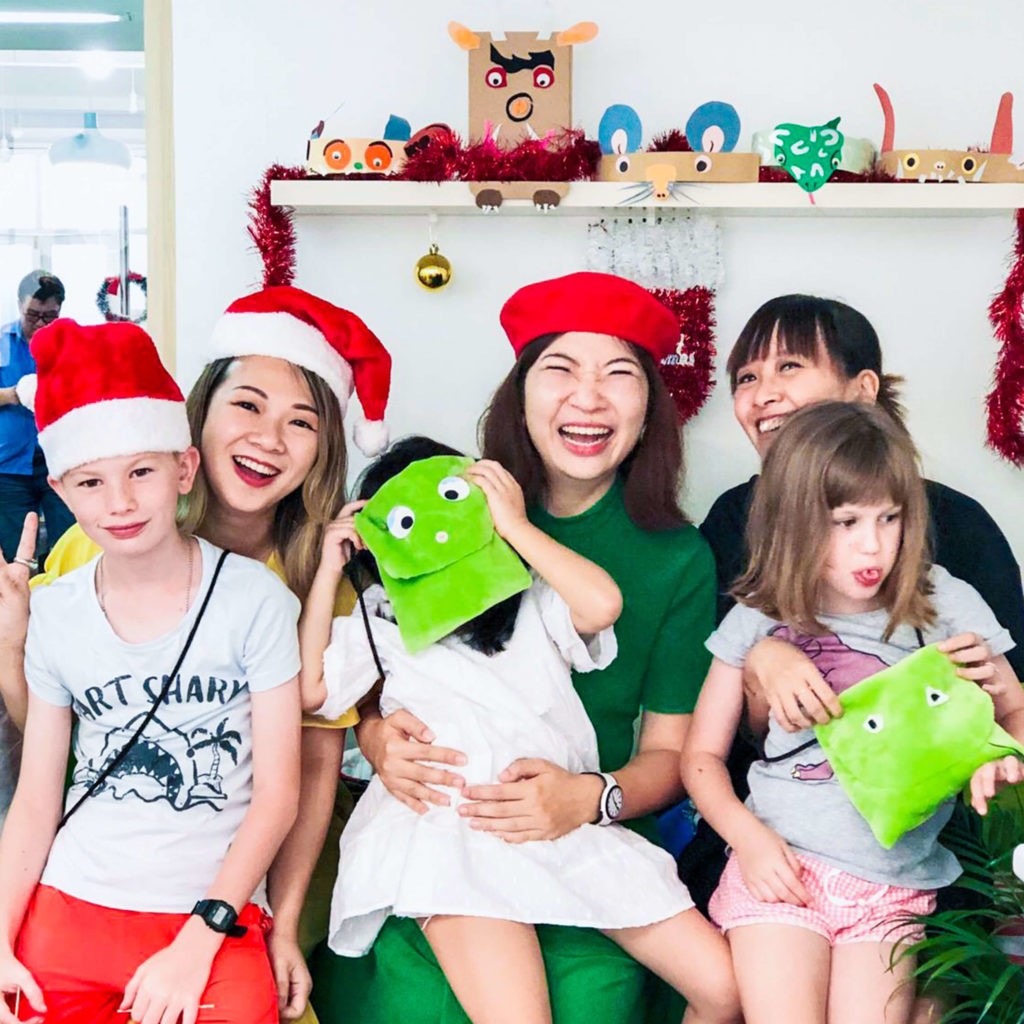 What Your Child Learns: 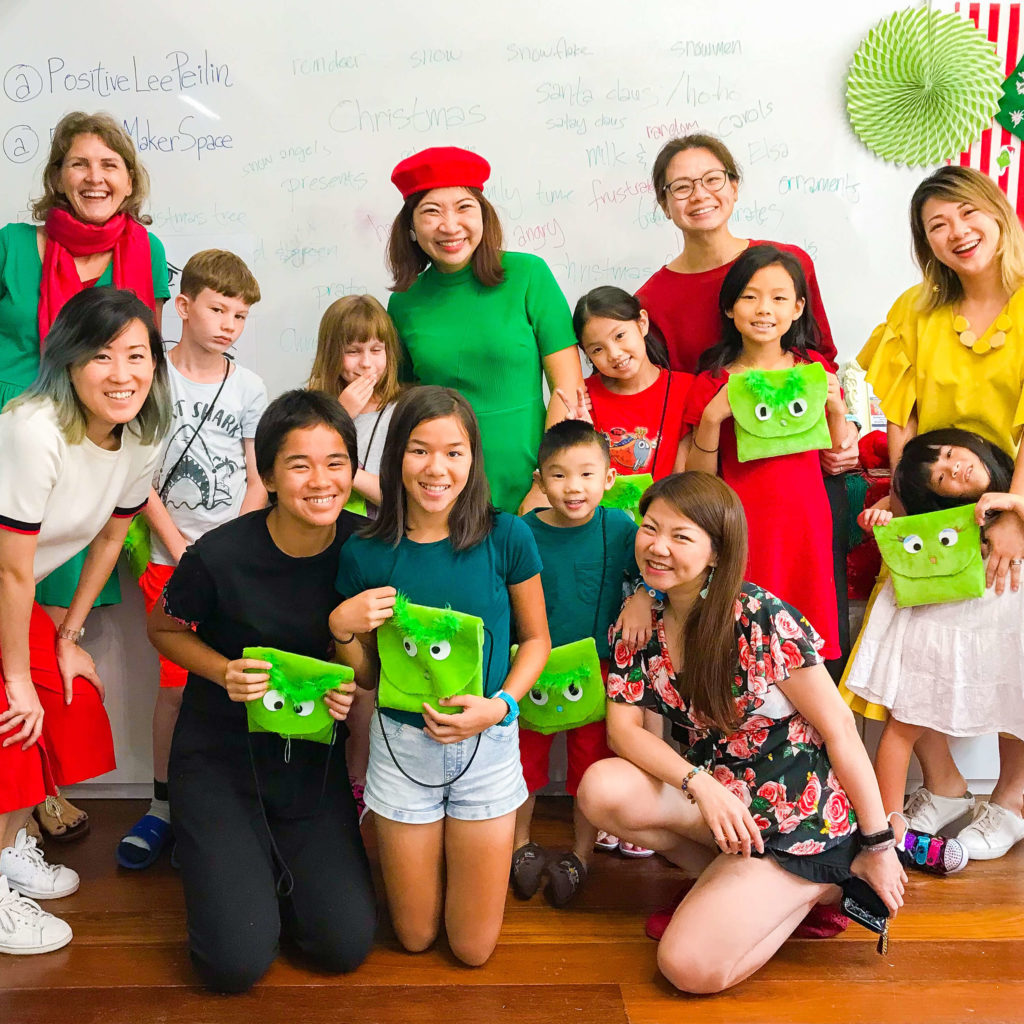 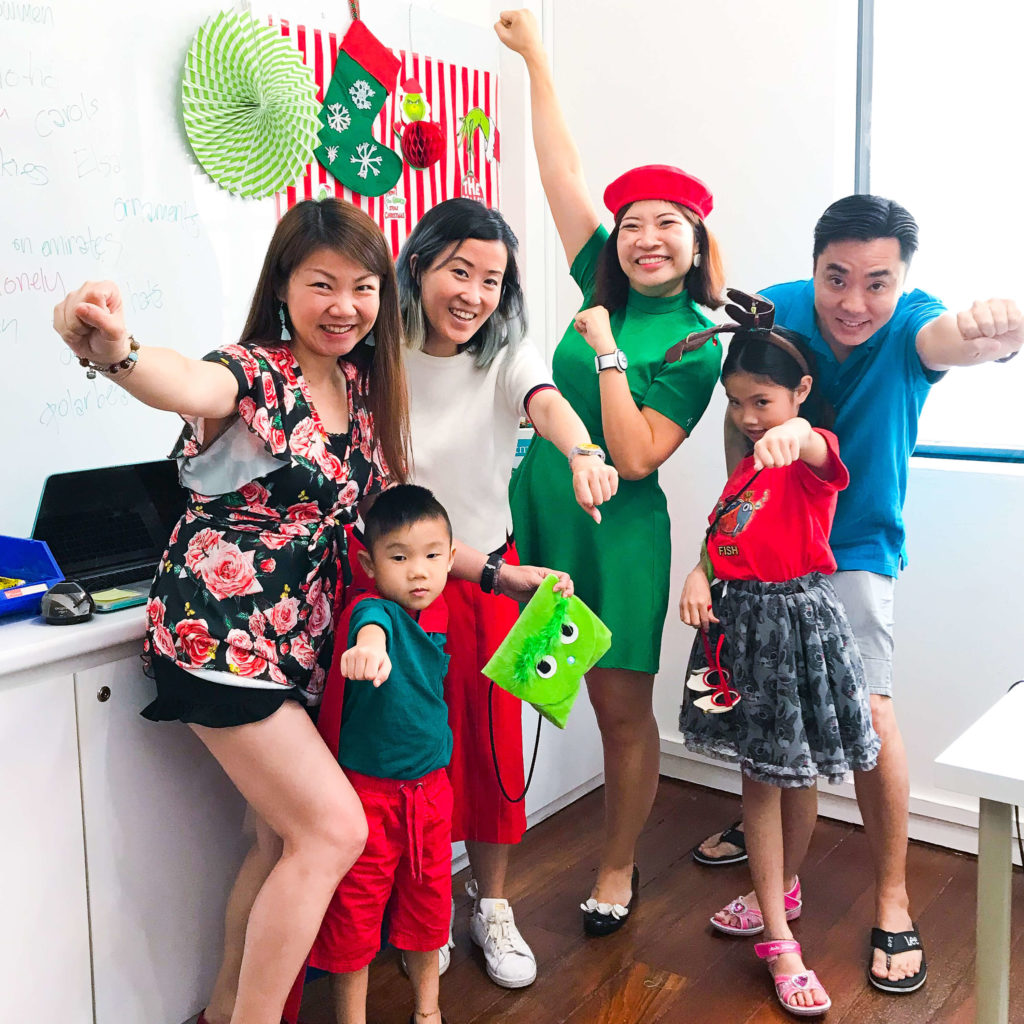 After 3-hours, each child had their own unique Grinch bag, which they proudly slung across their shoulders. The parents were also refreshed from catching up with one another as they observed their childrens’ behavior.

You can watch the highlights of our Grinch workshop in this video here!

The reason why I created the PositiveLeePeilin programmes is to serve children AND parents. I want kids to leave feeling confident and curious to try other things and parents to feel energized with new topics to discuss with their children.

What is the most important that you seek when sending your child for enrichment programmes or camps? Share your thoughts with us in the comments below. We would love to hear them!

Sign up for the next storytelling workshops for children in Singapore here.